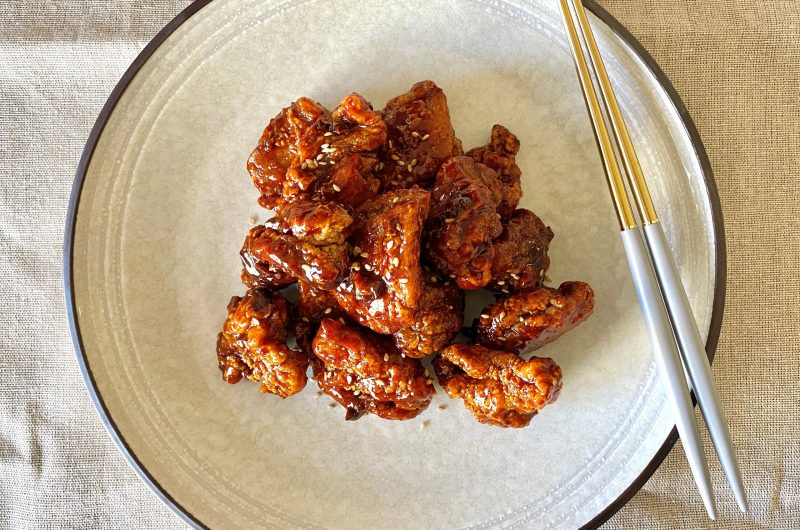 Hey everyone, Kevin here! Today I’m sharing with you a recipe for one of my favorite guilty pleasure foods, Korean fried chicken (KFC)!

In Korea, fried chicken is one of the most popular comfort foods. Everyone from teens to adults go out with their friends to grab fried chicken for a delicious meal. The first time I had Korean fried chicken was many years ago, when I was visiting a friend in Seoul. Back then, I didn’t even know that “Korean fried chicken” was a thing, but thankfully my friend enlightened me. At that time, it hadn’t become popular yet in the US, but in the years since, Korean fried chicken chains, like Bonchon and BBQ Chicken, have exploded in popularity here.

For this recipe, I decided to go with a spicy and sweet sauce since it’s one of the most classic flavors for Korean fried chicken. The spicy flavor comes from gochujang, or Korean chili paste. You can find this in any Asian supermarket, but don’t fret if you don’t have any near you! You can substitute gochujang with dried red chili peppers, or you can skip it completely for a more tangy-sweet sauce.

The way we fry the chicken to get that thin and crispy exterior is also a bit unique. Instead of just frying the chicken in one go, we fry it until it’s almost done, and then remove them from the heat and let them cool for a bit. It’s during this time that we make the sauce to maximize efficiency. After the chicken has cooled for a while, we flash-fry it for 30 seconds to 1 minute to get the exterior really crispy before we coat it with the sauce.

What Do You Eat It With?

Are you hungry yet? Let’s get started!