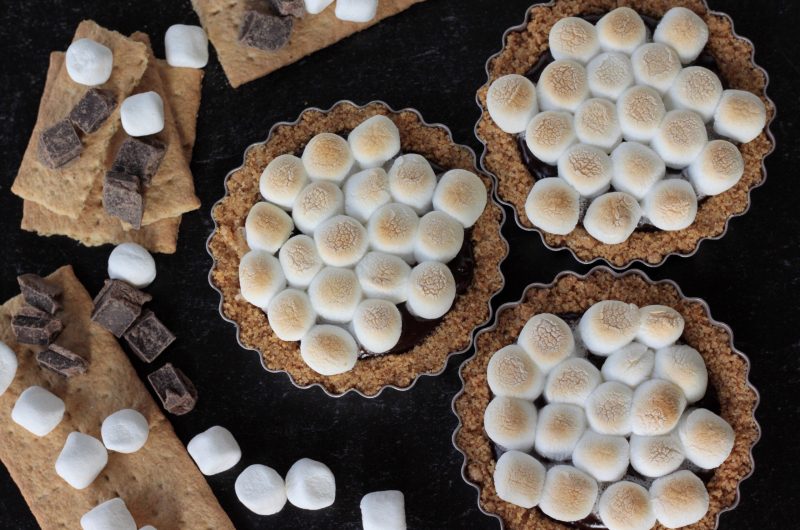 Hey everyone, it’s Sierra here! Today I have an amazing way for you to up your s’mores game: s’mores tarts!

This fancy s’mores recipe has everyone’s favorite s’mores ingredients—graham crackers, chocolate, and marshmallows. The graham crackers are crushed and formed into the tart crust, the chocolate is melted and turned into a rich ganache, and the marshmallows are used as a topping and melted on at the end. The result is a decadent s’mores tart that any s’mores lover would die for.

We do! On one of our first dates, Kevin and I went camping and made s’mores! Who doesn’t love sitting around the campfire and roasting marshmallows to smash between two graham crackers and some Hershey’s chocolate?

The beauty of s’mores is how simple it is to create such a delicious dessert. In the spirit of simplicity, while the presentation of these s’mores tarts may be fancier, they are actually really easy to make! Instead of solid graham crackers, I ground them up and to form a crispy crust. In place of Hershey’s bars, I used dark chocolate (70%) to make a rich chocolate ganache filling that tastes so amazing. And finally, instead of roasting the marshmallows, I placed them on top of the tarts and broiled them.

There are only 3 components, and each one takes just minutes to prepare!

This recipe is super easy, and you’ll be all set to make your own s’mores tarts with these few tips!

It’s important to carefully measure the amount of butter for the crust. I would recommend using a kitchen scale and measuring the weight exactly, but if you don’t have a kitchen scale, try to measure the tablespoons carefully. In my trials, using too much butter caused the tart to rise in the oven, leaving you no room for filling, and caused the crust to be too oily after baking. Too little butter caused the crust to be too brittle, making it nearly impossible to remove from the tin.

Make sure to tightly pack the graham cracker crust into the tin. Do your best with a small silicone spatula or even your hands to push the graham cracker mixture into the sides and bottom of the tin so that the crust isn’t too brittle. Make absolutely sure that there are no holes or loosely packed areas, as these will completely collapse when trying to remove the crust from the tin after baking. If your crust does come out a bit loose, don’t worry! You can just eat the tart out of the tin with a spoon 🙂

For a thick ganache filling, use a ratio of 1.5:1 dark chocolate to heavy whipping cream (measured by weight). Typically, for a thick truffle-like ganache, you would use a 2:1 ratio, and for something lighter, like cake glaze, you would use a 1:1 ratio. I wanted a thick filling that could set at room temperature but wouldn’t become completely solid, so I found a 1.5:1 ratio to work the best.

When broiling the marshmallows, I found that broiling on low on the middle rack yielded the best results. Any closer to the heat source, and the marshmallows burned too quickly without getting the chance to melt.

Are you drooling yet? Let’s get started on these rich and decadent s’mores tarts!

These decadent s’mores tarts are the perfect way to up your s’mores game! These tarts are easy to make, but look amazing and taste even better than traditional s’mores!