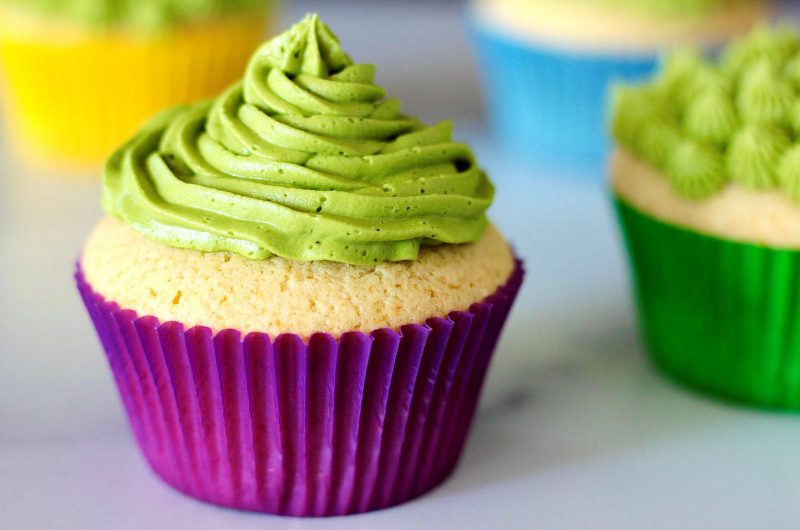 Hi everyone, it’s Sierra! I know I’ve done a lot of Earl Grey recipes, but that’s because Kevin and I just love Earl Grey so much! Today I have another one to add to the list—Earl Grey cupcakes with matcha buttercream frosting!

I’ve wanted to make cupcakes for a long time now, but I never knew what flavor cupcake I wanted to make. After trying all sorts of cupcake and frosting pairings, I finally settled on these Earl Grey cupcakes combined with a not-so-sweet matcha buttercream frosting. Earl Grey and matcha are two of my favorite teas, and the combination of the two tastes so amazing!

How to Make Fluffy Cupcakes

For these Earl Grey cupcakes, I experimented with a lot of different ingredients and ratios to figure out the best way to achieve a light and fluffy cupcake. Through these trials, a lot of the cupcakes turned out too dense, didn’t rise enough, or ended up just looking like a biscuit, but in the end, I found a combination that makes perfectly fluffy cupcakes.

The first important lesson I learned is to use cake flour instead of all-purpose flour. Cake flour, as the name implies, is perfect for baking cakes as it helps the batter become light and soft during baking.

My final tip is to use a whole egg plus an additional egg yolk. Using a whole egg helps the cupcake rise because the water in the egg whites will evaporate into steam, and it gives the cupcake more structure. I found it odd that some recipes I found used an extra egg yolk in the batter, but after doing some research, I found out that the additional egg yolk keeps the cupcake moist because of the high fat content in egg yolks. The fat in the egg yolk also creates a richer tasting cake.

How To Frost a Cupcake

If this is your first time making a cupcake, don’t get intimidated by the frosting step! It’s actually a lot easier than it seems, and you can have so much creative freedom with it. All you need to get started is a set of piping tips and a piping bag (there are lots of starter piping kits you can buy on Amazon).

Once you decide on a piping tip, just place the tip into your piping bag and fill the bag up with the frosting! As I mentioned earlier, for this recipe, I decided to use matcha buttercream frosting because it paired amazingly well with the Earl Grey flavor, but a simple vanilla buttercream will work too! Some other flavors that should pair well with the Earl Grey cupcake are lavender, caramel, or coffee.

For patterns, if this is your first time frosting a cupcake, you can try a simple swirl (tip: swirls will work best with a wider tip). Hold the piping bag in one hand, and starting at the edge of the cupcake, gently squeeze the bag with your other hand and slowly move the tip in a spiral.

A pattern that I found that I loved was to design the frosting to look like a succulent! It’s so cute and actually not much harder than doing a swirl. Start by placing one flower of frosting at the center. Then just pipe flowers in concentric circles around it until you reach the edge of the cupcake. You can add an additional layer by piping flowers on the open spots between the flowers of the first layer.

Now, let’s get started on these Earl Grey cupcakes!

These Earl Grey cupcakes are super light and fluffy and topped with an amazing matcha buttercream frosting. A perfect way to combine two popular teas to elevate a popular dessert!