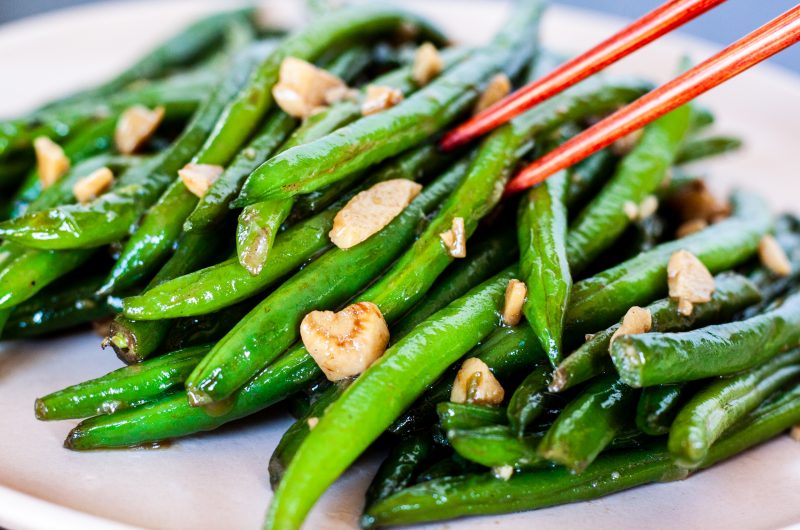 At the end of a long day, all I want to do is eat green beans.

Sierra LOVES green beans. So much so that since I started making this recipe, we’ve eaten green beans every day for a week straight. To be honest though, I hated green beans as a kid. Unlike bok choy, green beans were one of those vegetables I’d never touch unless my mom forced me. However, working on this recipe completely changed my perception of green beans. These Chinese stir-fried green beans are so simple, but I used a few techniques to try to make them as flavorful and authentic as possible.

After I started working on this recipe, I quickly realized that the reason my green beans didn’t taste good was because they were lacking seasoning. While I was adding soy sauce at the end, the green beans just didn’t have enough flavor. Luckily, I was reading Salt, Fat, Acid, Heat by Samin Nosrat at the time which gave me a few ideas as to how I could improve the flavor.

Another simple change I made was adding the soy sauce along the sides of my wok (instead of straight in the center) and letting it sizzle a bit before mixing it into the beans. I remember reading this tip in an article by J. Kenji López-Alt, where he suggested that adding soy sauce like this would impart that Authentic smoky soy sauce flavor commonly found in hole-in-the-wall Chinese restaurants (a large component of the elusive wok hei flavor). I tried it for myself in this recipe and found that it really did make a world of difference!

With just these two tips, I was able to transform my bland and one-dimensional green beans into a flavorful dish. The best part was that it didn’t require any additional ingredients or equipment, just a simple change in technique.

Looking for Chinese dishes to eat this with?

These Chinese stir-fried green beans are super flavorful and easy to make. If you don’t like green beans, this recipe will change your mind! They are a perfect healthy side dish for a busy weeknight.