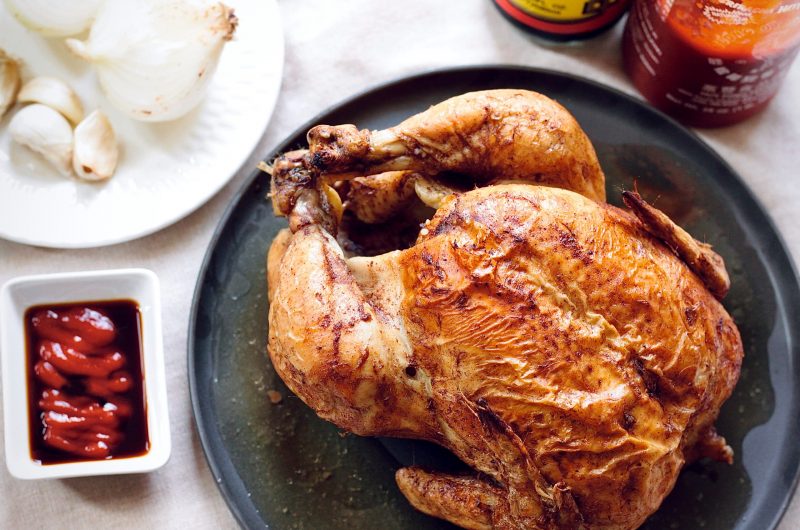 Hey everyone, Kevin here! Today, I have an extremely easy recipe for a Chinese roast chicken that only requires 5 ingredients!

The key to this simple yet delicious roast chicken recipe lies in the five-spice powder. I was inspired to make this dish because I was walking around the city with Sierra and saw a restaurant advertising their five-spice chicken. When I first started cooking, I had stumbled upon some Chinese recipes that used this spice, and it tasted so good that I knew I had to figure out a way to incorporate it into more dishes! This was the perfect opportunity, and so my Chinese roast chicken recipe was born.

What Is Chinese Five-Spice Powder?

Chinese five-spice powder is typically made up of five different spices: star anise, cinnamon, fennel, ground peppercorns, and cloves. These spices come together to create a mix of flavors that’s hard to describe with words–you have to try it for yourself!

Have you ever had your roast chicken look beautiful coming out of the oven, but then taste completely bland and dry when you take a bite? I’ve definitely had that happen to me in the past, so for this recipe I wanted to figure out the best and easiest way to make sure your chicken doesn’t come out too dry but still have crispy skin.

The combination that I found worked best for me was to refrigerate the chicken uncovered for several hours before roasting it, trussing the chicken, and taking it out of the oven when the meat reaches 150°F.

Refrigerating the chicken serves two purposes. First, because the five-spice powder rub is applied to the chicken before refrigerating it, those hours in the fridge allow the flavor to penetrate the meat. Second, the dry cool air in the refrigerator will help dry out the skin of the chicken, allowing it to crisp up in the oven.

I also brush the skin with sesame oil before placing the chicken in the oven. I used sesame oil instead of melted butter because I wanted to keep in the theme of a Chinese roast chicken. Sesame oil is very commonly used in Chinese cooking as a flavor enhancer. In this recipe, it helps the skin develop a beautiful brown finish and adds a hint of sesame taste to the chicken.

Before roasting the chicken, let the chicken sit on the counter for 30 minutes. This will even out the temperature in the chicken so that the whole chicken heats up at the same rate in the oven.

Trussing the chicken will also help it heat evenly. Trussing simply means tying the legs and wings to the body so that the entire chicken is one tight bundle. Normally, the wings and legs will splay out from the body, causing those parts to heat unevenly compared to the breast. To be honest, I had never trussed a chicken before this recipe, but it’s actually incredibly easy!

Finally, take the chicken out of the oven when its internal temperature is 150°F. The final internal meat temperature (measured in the meat of the thigh) that is recommended for safely consuming poultry is 165°F, but chicken breast is the most tender at 150°F.

I aimed to solve this by taking taking the chicken out of the oven at 150°F, when the breast is juiciest, then letting it rest until the internal temperature reached between 160°F and 165°F. This way, the breast, which is the most exposed part of the chicken, doesn’t keep increasing in temperature too much, but the innermost meat will keep getting cooked. Using this method, the breast meat and thigh meat both turned out perfectly juicy! I use a Meater to measure the temperature of the meat, but any instant read thermometer will work.

What Goes In The Cavity?

Last but not least, I’ll talk about stuffing the chicken.

Stuffing the cavity of the chicken is important for two reasons: first, it adds even more flavor to the meat of the chicken, and second, it helps to prevent the breasts from drying out.

For this recipe, I used a whole onion and garlic cloves as stuffing. These impart a subtle but noticeable flavor to the meat as the chicken roasts, and they taste amazing after roasting in the chicken for an hour.

Feel free to try out different vegetables and herbs as stuffing to see what kinds of flavors they’ll add to your meat!

With all of these tips, you should have no trouble roasting a succulent roast chicken with crispy, tasty skin. Combined with the amazing flavor of the five-spice powder, this Chinese roast chicken will be one of the easiest and most delicious roast chickens you’ve ever eaten.

This Chinese Roast Chicken recipe is so easy to make and only requires 5 ingredients! The Chinese five-spice powder does all of the work to create an amazingly flavorful chicken with juicy meat and crispy skin.