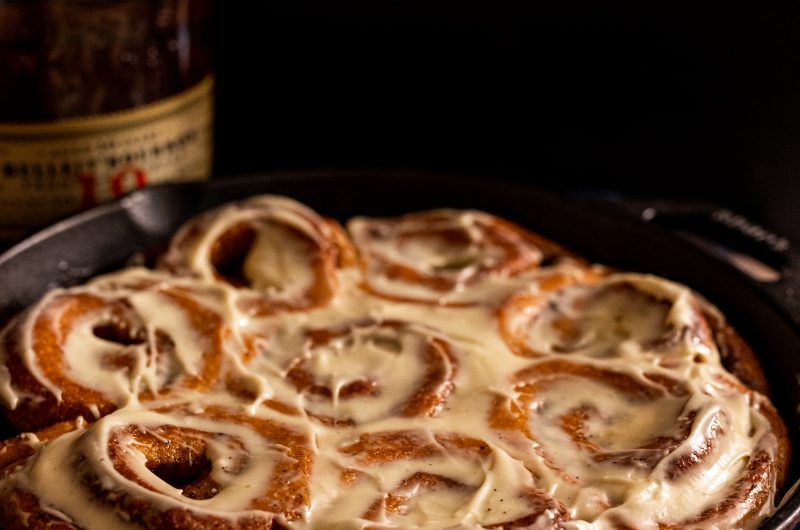 Hey everyone, it’s Sierra here! Today I have a recipe for cast iron cinnamon rolls frosted with a mouthwatering maple and bourbon frosting.

There are few things in the world that taste as delicious as a warm cinnamon roll fresh out of the oven. Kevin and I had some Cinnabons a few months ago on a road trip, and I haven’t been able to get them out of my head. To me, a perfect cinnamon roll has a crispy crust around the outside, a light, fluffy interior, a rich, decadent frosting, and of course, it must be filled with amazing cinnamon flavor.

Kevin loves cast iron pans and convinced me to try using one for making these cinnamon rolls. I was pretty surprised that the cinnamon rolls they produced turned out so well!

If you don’t have a cast iron skillet, don’t worry! You can make the same recipe using a 9-inch cake pan or pie dish. If you want to learn more about cast iron skillets, check out Kevin’s article about why everyone should own one.

We’ve been a bit obsessed with bourbon-flavored desserts recently here at The Mini Chef. We’ve made bourbon candied pecans and bourbon bread pudding, and now here is our third installment of bourbon-flavored desserts. The reason we’ve been using bourbon so much is that it is a warm flavor that is perfect for the colder months of the year. It has hints of vanilla, caramel, and oak, which pairs perfectly with other popular cold-weather flavors like cinnamon and nutmeg.

For this frosting, I adapted a traditional cream cheese frosting and added the popular pairing of bourbon and maple syrup. The slight tanginess from the cream cheese along with the sweet and warm of maple syrup and bourbon really sets this cinnamon roll frosting apart.

Tips for the Perfect Cinnamon Roll

Excited to make these delicious cast iron cinnamon rolls? Here are a few tips that will help you nail it on the first try!

These cast iron cinnamon rolls have a crunchy exterior, but a light and fluffy interior filled with cinnamon. They’re topped with a decadent maple syrup and bourbon cream cheese frosting that will have you fighting for seconds. These cinnamon rolls are so delicious that you’ll never need to buy Cinnabons ever again!