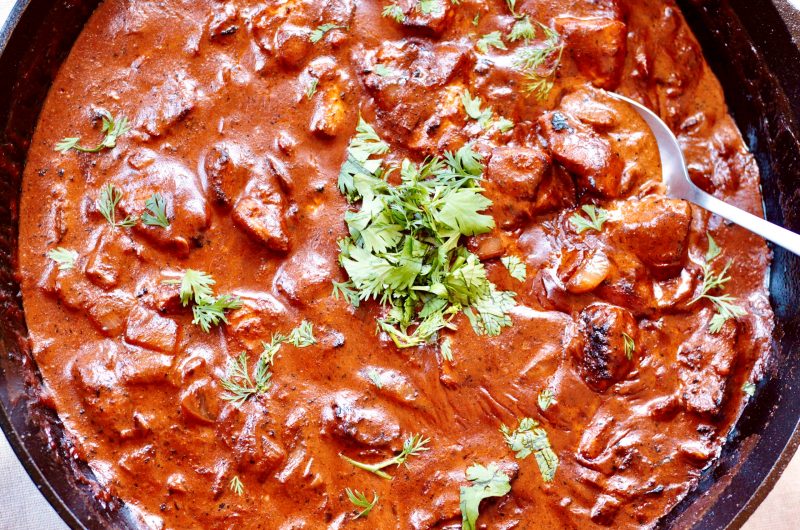 Hey everyone! It’s Kevin, and today I have a recipe for everyone’s favorite Indian takeout food, butter chicken!

Usually, Indian food requires a ton of ingredients, so in this butter chicken recipe, I’ve reduced the ingredients down to what I believe are the essentials for creating an amazing butter chicken and nothing more. I know that it’s hard to believe, but I promise that this homemade butter chicken will be at least as good, if not better, than any takeout butter chicken you’ve had! The best part is, it’s a lot cheaper, and the amount of time you actually spend prepping and cooking is less than an hour!

Why Is It Called Butter Chicken?

When I first tried butter chicken, I was confused by the name because the dish neither looked nor tasted like butter was a large component in it.

It turns out, butter chicken was actually invented by accident by the chef at Moti Mahal, a famous restaurant in Delhi, in the 1950s. The story is that the restaurant made a lot of tandoori chicken, which is a chicken dish roasted in a traditional Indian clay oven, but at the end of the day they didn’t know what to do with all the leftover dried up chicken. They didn’t want it to just go to waste, so butter chicken was invented as a way to rehydrate the dried chicken and serve it as a completely new dish!

The dried chicken was cooked with a mixture of butter and heavy cream, which combined with some flavorful spices and tomato sauce, brought completely new life to the tandoori chicken.

What’s In The Marinade?

We marinate the chicken because leftover tandoori chicken is used in the original butter chicken recipe. Tandoori chicken is made by marinating chicken in yogurt, lemon juice, and a combination of spices and then roasting it in a clay oven.

The marinade consists of some common Indian spices, such as cumin and garam masala (which itself is a spice blend), garlic, ginger, and salt. These ingredients give the chicken an amazing flavor even without the sauce.

The most interesting part of the marinade though is the yogurt and lemon juice. Lemon juice is commonly used in the states in meat marinades to help tenderize the meat, but I’ve never really seen a Western recipe use yogurt in the marinade.

The yogurt serves a similar purpose to the lemon juice in that it helps make the chicken more tender. However, the lactic acid and calcium in the yogurt do it more “gently” and over a longer period of time, which is why you should marinate for at least 4 hours for butter chicken.

Who doesn’t love the rich creamy flavor of the sauce that the butter chicken is cooked in? The key to an amazing butter chicken sauce lies in the use of butter and heavy cream. These are cooked together with a tomato and onion base and some common Indian spices to create an incredibly flavorful sauce.

As mentioned earlier, butter chicken was originally invented by accident to make dried out tandoori chicken edible again. This was accomplished by cooking the chicken in a sauce made with butter and heavy cream to help rehydrate the dried out chicken.

For this recipe, we don’t have dried out chicken, but the butter and heavy cream are still crucial to creating the creamy flavor that butter chicken is famous for.

For the tomato, I decided to use tomato puree. Some recipes use tomato sauce, but I found that it’s better to use plain tomato puree so that we have more control over the flavors. We just add a bit of salt and sugar and then let the strong flavors of the garam masala and cumin carry the depth of the flavor in the dish. Combined with the sweetness of the tomato puree and onions, the result is a rich and complex sauce that will haunt your dreams.

Are you ready? Let’s get started!

Typically, Indian recipes call for a ton of different ingredients, but this recipe uses only the essentials for creating an amazing butter chicken. It may be hard to believe, but the amount of flavor and complexity in this butter chicken will make you never want to order takeout again!