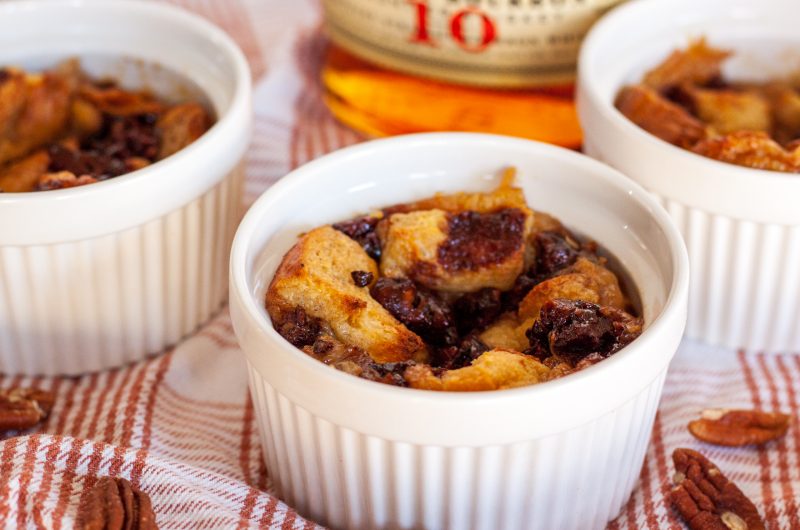 Here at The Mini Chef, Sierra is definitely the better baker between the two of us, but I wanted to try my hand at making my own bread pudding recipe. Bread pudding is one of my favorite desserts, and the best part is, it is so easy and requires very little baking skills! It’s also a great way to use leftover bread, since the staler the bread, the better (we even toast the bread in the oven to dry it out more). To make this even more of a cold-weather dessert, bourbon is used to add more warm flavors to go along with the cinnamon and vanilla in the bread pudding.

What is bread pudding?

Bread pudding is a simple dessert made by combining stale bread with a milk or heavy cream based custard. In terms of flavors, it is actually very similar to French toast. I was surprised because I had actually made brioche French toast recently, and when I started working on this recipe, I found that I was using almost the same ingredients.

You might have noticed that I’ve mentioned stale bread several times at this point. It’s so important to use stale bread in bread pudding because when the bread is dried out, it can absorb more moisture. That means more of the custard will be absorbed into the bread, creating a richer and more flavorful bread pudding. Don’t worry if you don’t have leftover stale bread though, since you can easily dry out your bread by lightly toasting it in the oven.

Bread pudding can be made with pretty much any kind of bread. While it is most commonly made in the US with brioche or challah bread (both of these are sweet egg breads), you can also use leftover artisan bread. If you do, just add a couple more tablespoons of sugar to the custard, as the bread itself will not be sweet. Using artisan bread will also yield a firmer pudding, as the bread will have more structure and is harder.

There’s not too much that can go wrong when making bread pudding, but I will highlight a few important points to keep in mind.

That’s it! Bourbon bread pudding is really easy to make, and will become one of your favorite fall/winter desserts! Let’s get started!

This bourbon bread pudding, topped with bourbon candied pecans, is the perfect dessert for those cold fall and winter nights. The warm flavors of bourbon complement the cinnamon and vanilla for a comforting and homey dessert.