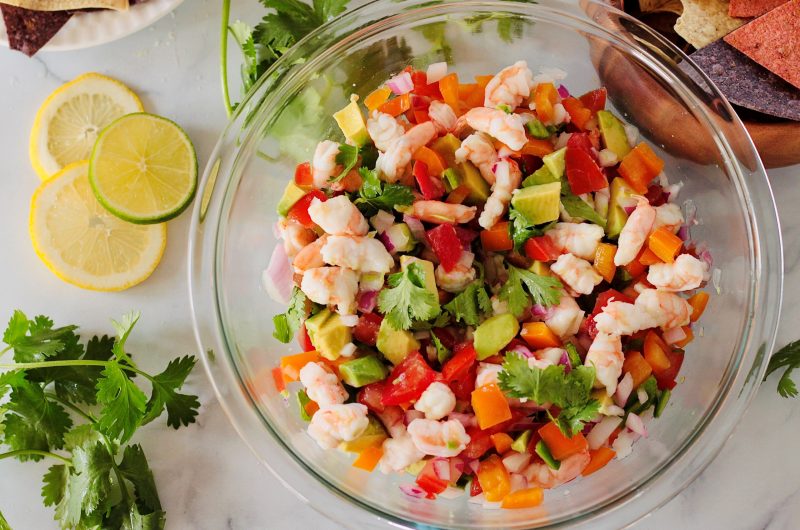 I was introduced to shrimp ceviche by one of my best friends, and I’ve wanted to try making it myself ever since. This refreshing dish is great as a snack, appetizer, or even a light meal during the summer! It’s super healthy—packed with vegetables and no added sugar—and very light since there is no cooking involved. Try eating it with some tortilla chips or tostadas!

Ceviche is traditionally a South American dish. To make ceviche, raw seafood (usually fish) is marinated in lemon and lime juice. By marinating the raw meat in these acidic juices, the meat toughens up and looks like it is “cooked”, while in reality, it is still raw.

The marinated seafood is then tossed with a variety of vegetables, usually colorful, to create a well-rounded and visually appealing dish. Some common choices include onions, peppers, and cilantro. To learn more about the origin of ceviche, check out this article by Coastal Living.

Because ceviche normally uses raw seafood, it is safest to use fresh, not frozen, seafood. In America, shrimp ceviche is a more popular alternative to the classic ceviche that usually uses raw fish. However, it can still be difficult to find fresh shrimp in many places, so for this recipe, I poach the shrimp—quickly cook it in near-boiling water—before marinating it in the lemon and lime juice.

Shrimp: As mentioned above, shrimp ceviche is best made with fresh raw shrimp. If you live on the coast, you should be able to get them from most grocery stores. However, this can still be inconvenient because you have to go buy the shrimp and then prepare it immediately, so for this recipe, I used frozen shrimp. We quickly boil the shrimp after defrosting it and before marinating it so that it will be safe to eat. Don’t worry, the flavor is still amazing!

Onion: This recipe uses red onion, but any kind of onion will work fine. I chose to use red onions because they add the most visual appeal, and they are the most common onion to eat raw. If you don’t want to use red onions, my next choice would be to use white onions, as they are commonly used in salsas and will pair well with our other ingredients.

Tomato: Tomato is another obvious choice for ceviche. By removing the seeds and meat of the tomatoes, most of the liquid is removed, so that the ceviche doesn’t turn into soup. However, we still get the sweet and tangy flavors of the tomato, as well as the, you guessed it, vibrant colors to make the ceviche pop. Food is really enjoyed as much with our eyes as our mouths.

Avocado: Avocado is the main point in which this avocado shrimp ceviche recipe differs from a more traditional ceviche. Avocado has become more and more popular in recent years due to its many health benefits and is now a staple in many American salads and sandwiches. As it is mild-flavored and is commonly used in raw dishes, it’s a perfect addition to shrimp ceviche. It adds a bit of richness to the taste, and it adds a lot of healthy fat to the nutritional profile of this dish.

Cilantro: Cilantro is a common herb used in Mexican cooking, typically used to add a “cooling taste” to spicy dishes. It is used in traditional ceviche and adds a refreshing flavor to the dish.

Other options: If you want to mix it up a bit, some other ingredients you can try are cucumber, radish, or olives. Feel free to experiment with ingredients that you have at home, and let us know how they turn out!

How to De-Seed Peppers and Tomatoes

I wanted to add a section to talk about the easiest way to prepare the seeded vegetables used in this avocado shrimp ceviche—bell pepper, jalapeno, and tomato. It wasn’t intuitive to me at first how these should be prepared, so hopefully you learn something here too!

The best kind of knife to use for preparing these vegetables is a small serrated knife. You could also do it with a chef’s knife, but I found that the teeth on a serrated knife made it a lot easier to cut the smooth skin. If you use non-serrated knife, just be careful of your knife slipping on the skin.

Now, if you’ve seen the inside of a bell pepper or tomato, you know that the seeds are all concentrated in the middle. So, to de-seed them, we just need to cut around the center.

For example, for the bell pepper, rather than cutting straight down from the top, cut into it at an angle and follow the curve of the flesh. You should get a flat piece of bell pepper with no seeds. Now rotate it and keep cutting it the same way until all that is left is a hollow center filled with seeds. You can do exactly the same with the tomato and jalapeno! Refer to the pictures below for what the end result should look like for each.

Now that you know how to prepare the ingredients, let’s get started on this light and refreshing avocado shrimp ceviche recipe!

This refreshing avocado shrimp ceviche is great as a snack, appetizer, or even a light meal during the summer! It’s super healthy—packed with vegetables and no added sugar—and very light!