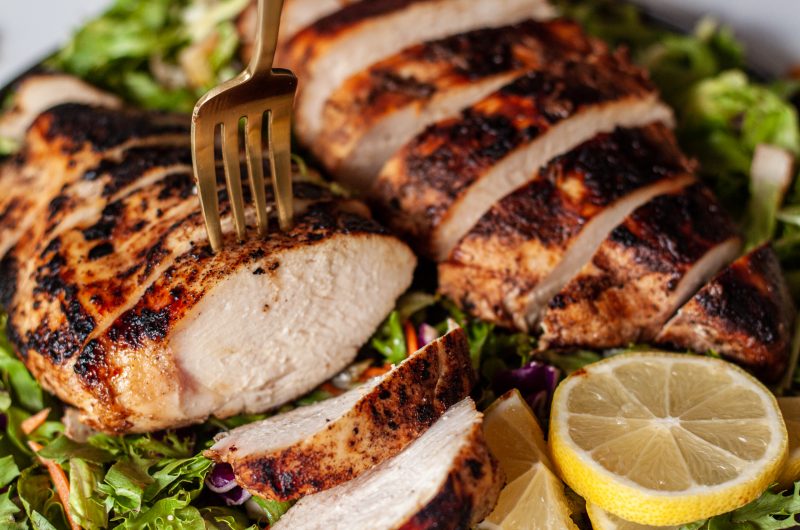 Hey everyone! It’s Kevin here, and today I’m bringing you a super simple recipe for an Asian grilled chicken breast that anyone can make at home!

What’s in the Marinade?

The marinade is made with a soy sauce and mirin base. Then I added some lemon juice, both for some acidity as well as to help tenderize the chicken while it was marinating, the all-important five-spice powder, and sugar. By letting the chicken breasts sit in this marinade overnight, after they are grilled, they explode with flavor in every bite, all the way to the center of the meat.

The resulting flavor from the marinade is both savory and a bit sweet, with the unmistakable taste of five-spice powder. Five-spice powder is made with star anise, cloves, Sichuan peppercorns, cinnamon, and fennel seeds, and this combination of spices creates such an incredible aroma and flavor. If you’ve never tried a dish with five-spice powder, you’re in for a treat.

This technique for making perfectly juicy stovetop grilled chicken is actually super easy, and anyone will be able to follow it as long as you have an oven-safe pan!

The idea behind this method is to get a beautifully seared exterior while keeping the meat itself juicy and moist inside. As everyone knows, chicken breast is really easy to overcook and make dry, but if you follow this recipe, you should have no problems.

First, heat up an oven-safe pan (preferably cast-iron) over medium-high heat. Once the pan is hot, add oil and swirl to coat the surface before placing both chicken breasts into the pan. Sear them for 2 minutes on each side to get a nice crust formed.

After the chicken is seared, transfer the entire pan to an oven preheated to 350°F and cook for about 20 minutes, until a meat thermometer inserted into the thickest part of the breast reads 150°F.

Let the chicken rest for 5 minutes, and you’re ready to eat! Serve with some leafy greens or with a side of rice.

Are you ready to make this incredibly juicy and flavorful Asian grilled chicken? Let’s get started!

The MOST Flavorful and Tender Asian Grilled Chicken Breast