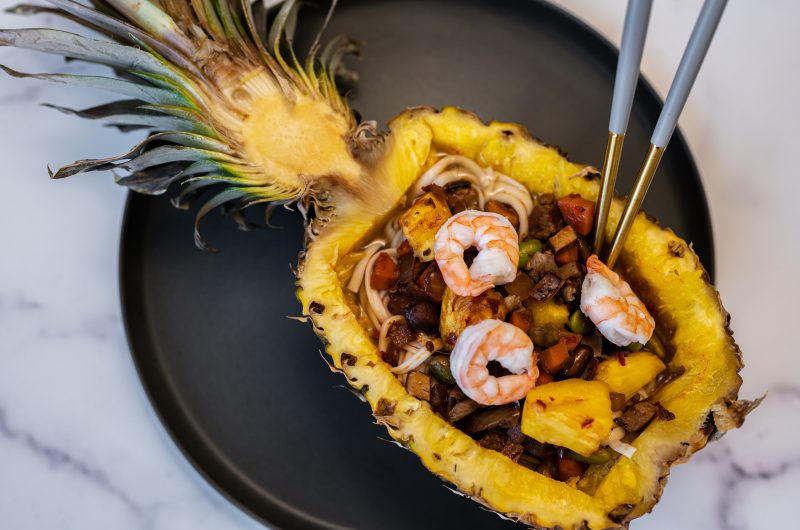 Hey everyone, it’s Kevin here! Today I’m bringing you a famous recipe from the Chinese drama, Meteor Garden. In the show, the main character makes these 8 treasure spicy noodles (八宝辣酱面) as part of a cooking competition and almost wins.

Ever since I watched Meteor Garden, I wanted to try recreating this show-defining dish. In the show, the main character is inspired to make this dish by her “boyfriend” (just a love interest at the time of the competition) nicknamed “pineapple-head” (his hair looks like a pineapple). As such, her dish deviates from the traditional 8 treasure spicy noodles by including pineapple as one of the “treasures”.

I was worried that adding pineapples would make the dish taste a little weird, since it isn’t a very common ingredient in savory dishes, but I was glad to be proven wrong! The pineapple adds a bit of welcome sweetness and freshness to the sauce that helps lighten up the dish. In general, I’m not a huge fan of noodle soups, but this 8 treasure spicy noodle (八宝辣酱面) is definitely the exception!

In China, 8 (pronounced “ba”) is considered one of the luckiest numbers, stemming from the fact that it sounds similar to the word for “wealth” (pronounced “fa”) in Chinese. The name “8 Treasures” means that there are 8 main ingredients in this dish, making this a lucky dish! In fact, the name 8 Treasures isn’t unique to this dish, as there are also “8 Treasures Rice Pudding” and “8 Treasures Porridge” dishes in China.

Since this recipe is inspired by the show Meteor Garden, I wanted to adhere as closely as possible to the ingredients used in the show, especially the pineapple.

Don’t be intimidated by the ingredient list! This 8 treasure spicy noodles recipe is actually really easy, and can be made in just a little over 30 minutes! Here are some tips to help you get started: